This was one intense and claustrophobic book, but I loved every second of it.

We meet a doctor in a rural town in India. He is used to far better conditions than the ones he is currently working under, his clinic lacking most modern medical equipment and sometimes necessary drugs. He does what he can for the villagers, but not without some degree of resentment. This isn’t the place he wants to be, nor feels he should be. After sunset one night a family shows up at his clinic, asking him to operate on them. They seem perfectly healthy, but their clothes are hiding fatal wounds. The three members of the small family, four if the unborn baby is included, died after being violently stabbed. In the afterlife, an angel gives them a choice of returning to the land of the living, but he can’t heal their wounds, he can only keep them alive for one night in an artificial way. A surgeon will have to fix the damage to their bodies before sunrise if they are to remain alive. Suddenly, the doctor is in a position of having to raise the dead instead of healing the living. 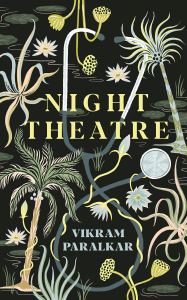 Although we are presented with a plot that includes the afterlife, angels and supernatural occurrences, this isn’t a particularly religious novel. It is more philosophical. This situation naturally brings with it a lot of questions and fears. The superstitious girl working for the doctor wonders if God will punish them for going against him, for playing God with these people’s lives. The doctor struggles with the expectation that he’ll be able to save the family and with the potentially life changing and devastating consequences for him and the others involved if he fails to save them. They see him as a brilliant doctor and a great man, unselfish, devoted to saving lives no matter the cost. He knows he is neither, though he would, by any normal standard, be considered a good doctor and a good man. Nothing in this book is simple and straightforward, nothing is black and white. Should he save them? Can he save them? Can he live with the consequences of his own limitations?

The reason I found the book claustrophobic is that everything that happens takes place in the clinic, during one night. In addition to operating on each member of the family, the doctor has to avoid anyone finding out about what’s happening, which proves difficult, as both an annoying village drunkard and a corrupt clinic official pays a visit during the night, leaving the family and the girl helping him to hide. The family themselves are told that if they survive they can never leave the borders of the village, and the doctor is lacking so much in order to help them survive, not to mention cope with pain as they come alive after sunrise, that the village seems like a place cut off from the world at large, too small to be chosen for this task. And with every hour that passes, the doctor’s lack of sleep becomes more and more unbearable..

The descriptions of wounds and of the operations are detailed and realistic, making the novel very gritty. The themes of murder, corruption, the feeling of hopelessness makes it even more so. Though slow paced, the story is incredibly gripping, both because of the tension when unwanted visitors show up, the level of difficulty of the operations and the wonder at what the world is like if a dead family can come back to life. I have to agree with everyone who has written that the story feels very realistic, despite the unrealistic premise of the book. I listened to the audio version and the reader did a great job. He was very engaging, he gave different characters different voices and you could feel the exasperation and the exhaustion through his voice. I got completely lost in this story and just loved everything about it.