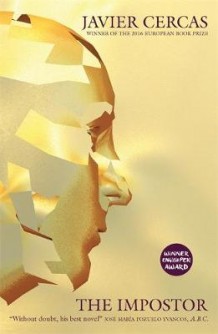 I wasn’t in a concentration camp. I was held in captivity and the Nazis did impose penalties on me. But that does not exonerate me from being an impostor.

The title of Cercas’ book refers to Enric Marco, a Spanish man who was discovered in 2005 to have falsified a past as a prisoner in Flössenburg, one of the Nazi concentration camps during World War II. In reality, Marco had volunteered to work in Germany during the war, and though he was imprisoned in Kiel for six months whilst working there, he was never in a concentration camp. He left Germany and went back to Spain in 1943. In The Impostor, Cercas gives himself the task of trying to find out more about what really happened to Marco and why he lied. The result is an educational and philosophical book that is also incredibly engaging.

In the chapters about Marco, Cercas digs deep into Marco’s past to give the reader an insight into who Marco is, starting at the very beginning of his life, trying to show how Marco was shaped by his family and by the environment around him. Marco grew up during the Franco regime in Spain and, according to himself, he was part of the revolutionary movement that fought Franco. He lists big events that he supposedly was present at, and he names a number of important opponents of Franco who used to be close friends of Marco. The problem is that the more the author digs into Marco’s past in Spain, the more claims he finds to be either wholly or partially made up. It is clearly not only events about the war Marco has lied about, he has been lying about his life since he was a young man. He discovered relatively early that he was a charismatic person whom people were attracted to and whom they were easily impressed with, and he used that fact to his advantage. In reality, Marco seems like quite a cowardly man who has always tried to remain on the side of whoever is in power – he never fought against the Franco regime in any way for example – but he wants to be seen as a hero, a revolutionary or an important man. The lies were probably both the result of a desire to stay on the good side of the revolutionaries after the fall of the Franco regime, but also as a way of getting attention for being heroic.

Do you know how many journalists, how many students came to see me in 2001 or 2002 or 2003 or 2004 or 2005 believing they had found their own Miralles, their veteran of every just war, their forgotten hero? What was I supposed to do? Tell them to fuck off? Tell them that there are no such things as heros? Of course not: I gave them what they had come looking for, the same thing you had given them in your novel.

Cercas tries to put the earliest of Marco’s lies into a larger context by explaining that this behavior was not unique to Marco in Spain after Franco. Most Spaniards claimed at the time to have been opponents of the regime, and no one questioned these lies. There was no settlement with the past, everyone just wanted to forget about what had happened and move on in silence. The easiest way to manage this was to pretend that everyone had always hated the regime and that most of the Spanish population was thrilled with the new state of affairs. So Cercas does try to explain why Marco might have lied about his past after the regime fell, and he does justify these lies to a certain degree. But, as we know, these were not the only lies Marco would tell.

This is the reality: at least during the years of transition between dictatorship and democracy, Spain as a country was as narcissistic as Marco; it is also true, therefore, that democracy in Spain was built on a lie, whether an enormous collective lie or a long series of individual lies. Could it have been built any other way? Can democracy be built on truth? Could the whole country honestly have recognised itself for what it was, in the horror, the shame, the cowardice and the mediocrity of its past, and forged ahead regardless?

Javier Cercas also writes himself into the book. He recounts his own meetings with Marco and he spends a lot of time debating whether or not it’s a good thing to tell Marco’s story. Will writing about him give Marco attention he desperately craves? Or will he surely kill Marco by exposing every one of his lies, leaving him with nothing? The author neither wants to do Marco a favor nor destroy him, but he is curious about what drives a man to lie to such a degree about his own past. He wants to understand Marco, and he tries to do this by comparing him to novelists like himself. By lying, Marco is telling stories. He is both engaging and convincing. He himself feels he is contributing positively to society by seeking positions of authority where he can do good work. It does not matter to him that he gets these positions using false premises. Through his lies he presents himself as something other than what he is. Cercas compares him with a novelist, since they relate to lies in the same way that Marco does, purposefully trying to fool an audience, though the difference is that the reader knows he is being fooled, the people Marco fooled did not know.

Vargas Llosa is right: Marco is a genius because he succeeds at everything, in real life and for many years in what great novelists only partly achieve in their novels, and even then only for as long as it takes to read them; that is to say, he deceives thousands and thousands of people, making them believe that he was someone that he was not, that something that did not truly exist actually existed and that what is actually a lie is in fact the truth. But Marco’s genius, of course, is only partial. Unlike great novelists, who in exchange for a factual lie deliver a profound, disturbing, elusive, irreplaceable moral and universal truth, Marco delivers only a sickly, insincere, mawkishly sentimental story that from the historical or moral point of view is pure kitsch, pure lies…

The brilliance of this book is that it is interesting on all levels. The reader gets a glimpse of Spanish history both before, during and after World War II. We witness a kind of detective story where the author is struggling to find the truth that lurks behind all of Marco’s lies. Both through interviews with Marco and with others, as well as through a deep dive into archives in Germany and Spain, the author finally gets a picture of who Marco really is. Whilst uncovering the truth about this man, Cercas tries to the extent that he can to avoid judging Marco. He asks himself many questions about the impact of Marcos lies, and also about his own role in Marco’s story, and whether what he does by writing this book is positive or negative. And who it might be positive or negative for. Marco? The people he has fooled? The actual survivors of the German concentration camps? He acquires different views on Marco from people who used to know him, from people he has worked with and from his family. The book is partly a history book, one part detective novel, and also one part moral philosophy. All the different aspects of the book are well connected and we get a lot of differing viewpoints on the main questions of the book: why did Marco feel the need to tell these lies? Has he hurt someone by lying or is it harmless, possibly positive – lies he has told? Why are the reactions to such lies when they are exposed almost stronger than the reactions to violence and other cruelties that we hear about in society daily?

Look, I can understand that the people who were fooled by him are angry, after all he took them for a ride; I can even understand that most people are a little angry with him, because he fooled everyone. What I don’t understand is why they attack him so relentlessly when this country is full of bastards who have been responsible for murders, who have robbed and done all sorts of disgusting things, and nobody seems to go after them: in fact, people kiss their arses.

I still don’t understand why this book was nominated for The International Man Booker Prize. Although the author calls the book a novel without lies, it is a non-fiction book, and therefore not a candidate for a prize awarded to novels. But I’m not complaining, because I probably wouldn’t have discovered this book if not for its position on the International Booker longlist. That would have been a shame, because this is one of the most fascinating and engaging books I have read in a long time.